ZECHARIAH –– “THE KING IS COMING!”

Zechariah depicted on Michelangelo’s ceiling of the Sistine Chapel

THE COMING OF THE KING

“Rejoice greatly, O Daughter of Zion! Shout, Daughter of Jerusalem! See, your King comes to you, righteous and having salvation, gentle and riding on a donkey, on a colt, the foal of a donkey” (Zechariah 9:9). How remarkable that on Sunday, as Jesus rode into Jerusalem, these words were fulfilled.  “They brought the donkey and the colt, placed their cloaks on them, and Jesus sat on them. A very large crowd spread their cloaks on the road, while others cut branches from the trees and spread them on the road. The crowds that went ahead of Him and those that followed shouted, ‘Hosanna to the Son of David!’ ” (Matthew 21:1-9). 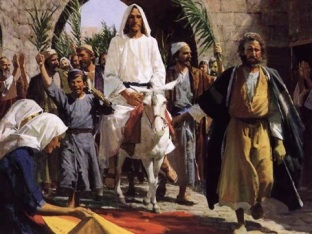 Notice the royalty of the Messiah. The King comes! He is the one of whom Jacob spoke: “The scepter will not depart from Judah, nor the ruler’s staff from between his feet until He comes to whom it belongs and the obedience of the nations is His” (Genesis 49:10).  God promised on oath that one of David’s descendants would sit on his throne. He spoke of the resurrection of Christ. Therefore, be assured of this: God has made Jesus both Lord and Christ (Acts 2:30-36). He is the new King reigning over God’s spiritual nation. Jesus sits on the throne of David. “His kingdom will never end” (Luke 1:32-33). To be a follower of Jesus Christ means to be committed to His absolute authority, to obey His commandents without reservation.

Notice also the accomplishments of the Messiah. He rides not on the steed of military aggression, but on the foal of a donkey — the animal which symbolizes humility and gentleness.  He is “righteous and gentle and riding on…the foal of a donkey.” Again, “He will proclaim peace to the nations” (Zechariah 9:10). But He has accomplished even more!  He lived a righteous life of (Zechariah 9:9). Like a righteous king described by the psalmist Jesus will “deliver the needy who cry out, the afflicted who have no one to help. He will take pity on the weak and the needy and save the needy from death. He will rescue them from oppression and violence, for precious is their blood in His sight” (Psalm 72:12-14). If you are looking for righteousness and peace in your heart Jesus is the One you need. He is the only One who can deliver what He promises. “Till the moon is no more” Jesus will be our assurance that “the righteous will flourish” (Psalm 72:7), and that those whose hearts are troubled will find the “peace of God that transcends all understanding” (Philippians 4:7).

Zechariah was commanded by God to assume the role of a faithful shepherd of God’s flock. Almost immediately he ran into the stiff opposition of religious leaders, worthless shepherds, who were interested only in making money by slaughtering the sheep. Even the people he was trying to guide and protect despised him! In extreme frustration over Israel’s leaders he resigned his assignment and went to those responsible for paying his salary, demanding, “If you think it best give me my pay; but if not, keep it.” They weighed out only 30 pieces of silver” –– the pitiful value of a slave but certainly not of a shepherd (Exodus 21:32)! At God’s direction, Zechariah promptly threw the coins into the house of the Lord to be given to the potter (Zechariah 11:4-14)

Early in the morning Judas grieved with agony because he had betrayed His Lord for 30 pieces of silver.  The Scripture records:  “He was seized with remorse and returned the thirty silver coins to the chief priests and the elders. ‘I have sinned,’ he said, ‘for I have betrayed innocent blood.’ …. So Judas threw the money into the temple and left. Then he went away and hanged himself.  The chief priests …. decided to use the money to buy the potter’s field as a burial place for foreigners. That is why it has been called the Field of Blood to this day” (Matthew 27:3-8). Little did Judas know that 500 years earlier Zechariah had participated in a very similar tragic story.

Can we not see the heart of Judas in this story?  Judas (like the corrupt leaders of Israel) messed up his own life and the life of others. As the leaders of Zechariah’s day failed to appreciate God’s true shepherd, and undervalued his worth, so Judas failed to appreciate Jesus as the Shepherd of God’s flock. He sold the precious Son of God for the price of a slave. How frustrated he became with himself! How remorseful! It was too late to reverse his foolish actions. Judas’ hope for the future was gone forever. Without hope his life would end in despair. The betrayer of the Son of God returned the thirty pieces of silver and doomed his body to suicide.

The Tyndale Commentary summarized the lessons for us: (1) The responsibility for human chaos lies squarely on human shoulders. (2) God has offered men His Shepherd but they have rejected Him, to their own irreparable loss. Sinful attitudes and sinful actions result in shameful decisions that hurt us and others.

THE ONE THEY PIERCED

The prophet spoke of a future day of grace and forgiveness:  “Tbey will look on Me, the one they have pierced, and they will mourn for Him as one mourns for an only child, and grieve bitterly for him as one grieves for a firstborn son” (Zechariah 12:10). The word translated “pierced” usually refers to being stabbed with a spear or sword.  Zechariah 13:7 identifies the One pierced as the Lord’s Shepherd, none other than “the man who is close to Me” (NIV), or who “stands next to Me” (ESV). We can hardly read this without thinking of the Lord Jesus.  Is it any wonder that the apostle John wrote: “one of the soldiers pierced Jesus. side with a spear, bringing a sudden flow of blood and water …. These things happened so that the scripture would be fulfilled:…’They will look on the one they have pierced’ (John 19:34-37).  His mother, friends and disciples mourned over Him as the “firstborn son,” God’s “one and only Son” (John 3:16). The blood of Jesus is “precious” because it is through His blood that we receive forgiveness of all our sins –– no matter how serious, when we sinned, or how often we repeated it. When we are baptized (immersed) into the death of Jesus, God forgives our past sins (Romans 6:3-4; Ephesians 1:7). After baptism, the “blood of Jesus Christ, His Son, cleanses us from all sin” (1 John 1:7-10).  Have you been washed in the blood of the pierced Shepherd?

“STRIKE THE SHEPHERD AND THE SHEEP WILL BE SCATTERED”

Who else but Jesus Christ could have fulfilled these remarkable 500-year-old prophecies in such minute detail?

The words of Zechariah builds our faith in Christ. His book reminds us of what Jesus went through to bring salvation and peace to our world. It encourages us to see anew that through God’s love and providence He has provided a Savior for us.  As the “Minor Prophet” declared: “A fountain will be opened to the house of David and the inhabitants of Jerusalem, to cleanse them from sin and impurity” (Zechariah 13:1).  Jesus is the Fountain. Have you been to Jesus for the cleansing power?

TO RECEIVE EACH POSTING OF DAVID’S BLOG, enter your e-mail address to follow this Blog and receive notifications of new posts by e-mail. Then click on FOLLOW.

2 Responses to ZECHARIAH –– “THE KING IS COMING!”